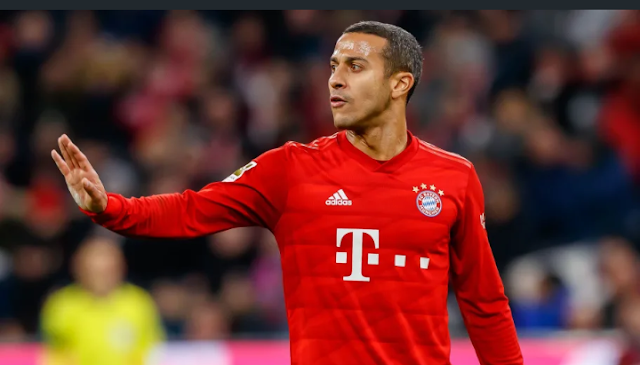 Exclusive - Manchester United legend and Sky Sports pundit Gary Neville has revealed why both his former club and reigning Premier League champions Liverpool should be trying to sign midfielder Thiago Alcantara, who is seeking a new challenge away from Bayern Munich.

Liverpool have been the club most heavily linked with Thiago and a potential deal is rumoured to have stalled over the Reds’ refusal to pay an asking price of around £30m for the Spaniard.
United have also been linked more recently, albeit less prolifically, and Neville, speaking to 90min ahead of Sky Sports' 29th season of live Premier League coverage, says that Thiago would be a massive boost to both teams, even suggesting that Liverpool actively ‘need’ to sign him in order to keep things fresh and lessen the risk of complacency creeping in.
“I think if [Liverpool] got him, he would be a massive addition to their midfield,” Neville begins. "“He’s a brilliant player, I think he’ll give them composure, control and experience.
"He can hold the ball and feed the front three better than any of the current midfield players can. He will also be able to connect to the back better than any of the current player they’ve got can.”
The eight-time Premier League champion describes paying £30m for Thiago as potentially an ‘incredible piece of business’, hinting that signing him or not could be the difference between Liverpool being ‘outstanding’ again in 2020/21 or returning to more in levels.
“There is a danger if they don’t sign him, that they’ve been together two or three years and it just dips over the edge,” Neville warns.

“I feel like they need to sign him, in my experience, to stimulate the players who are there and make them believe they’re pushing again. If you don’t sign someone like that, in some ways, there’s nothing different, it’s all the same. The coach is the same, the players are the same, the relationships are the same, the jokes are the same. I think he would add a new dynamic.”
With Liverpool stalling over the transfer fee, United have emerged as potential suitors. Neville backs his former club to go for a deal, despite already possessing Paul Pogba and Bruno Fernandes in creative midfield roles. That is because Thiago could play deeper.

From which club did Manchester City sign Yaya Toure?

“United weren’t really strongly linked with him and I can see why with Pogba and Fernandes. But watching him play in a two-man midfield for Bayern Munich, I don’t think he needs to play in a forward role,” Neville explains.
“I think he can play deeper and United’s players in that position – Fred, [Scott] McTominay, [Nemanja] Matic – have all done okay. But if [Thiago] was there…I think he’s clever enough to intercept, read the game and do the things that a holding midfielder can.
“You don’t need to be six feet tall, tackle and quick to play in that position anymore. You just need to be intelligent and understand the game, and he’s got that in abundance. I don’t know why United wouldn’t try and get him, particularly if he was going to Liverpool because it would strengthen them.”

The ‘Season of Sustainability’ is further progress on Sky’s ambition to become net zero carbon by 2030, two decades ahead of government legislation. Through the ‘Season of Sustainability’ Sky will talk directly to sports fans, encouraging them to make simple, everyday changes to reduce their carbon footprint as part of their Sky Zero campaign.
There will also be the first First Transfer Deadline Day to be albert certified. Albert - set the benchmark for sustainable production.