Football’s all about what you win for your team but any player who says they don’t care about individual accolades is lying. And one o... 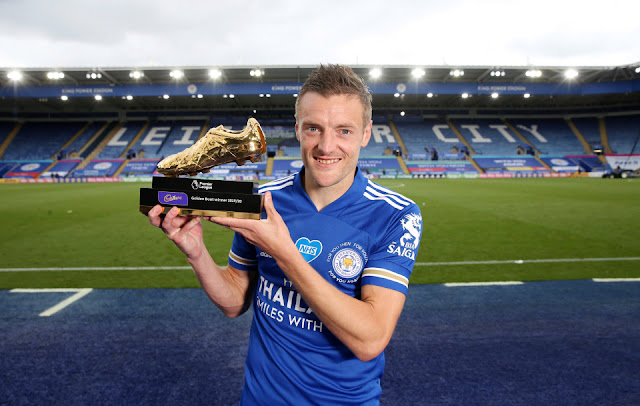 Football’s all about what you win for your team but any player who says they don’t care about individual accolades is lying.
And one of the most precious a pro can win is the Premier League’s Golden Boot award.

Some greats of the game including Alan Shearer, Michael Owen, Thierry Henry and Cristiano Ronaldo have been the top flight’s highest scoring player, so whoever wins it this season will be in great company.
Jamie Vardy won it last season with the striker scoring 23 goals last term, a fine effort from the 33-year-old.
The likes of Arsenal star Pierre-Emerick Aubameyang, Danny Ings, and Raheem Sterling were hot on his heels, though.
But who will win it this time? talkSPORT.com‘s esteemed group of writers have made their predictions on who will lift the Golden Boot come May.
“Is Roberto Firmino good enough for what Liverpool want to achieve?” - Adrian Durham says Reds need new No.9

Pierre-Emerick Aubameyang
A slightly risky call as it’s not been announced whether he’s signed a new Arsenal contract but it seems this will happen sooner or later.
Aubameyang has already won it before, sharing the prize with Mohamed Salah and Sadio Mane in 2018/19 and I’m backing him to win it on his own this time. He’s the complete striker and will be essential to any success Arsenal can dream of this season.

Mohamed Salah
Although last season wasn’t his best campaign, the Egyptian is a prolific goal-scorer and his selfishness in front of goal will see him claim his second Golden Boot.

Timo Werner
The German striker will have chances galore this season with Christian Pulisic, Ziyech, Havertz and Mason Mount all feeding him.
He’s looked good in pre-season already and I can see him adapting to life in the Premier League quickly.

Harry Kane
If he stays fit… While Jose Mourinho has been criticised for his style of play in recent years, he has always got the best out of his strikers. Didier Drogba, Diego Costa and Karim Benzema have all thrived under Mourinho – and Kane seems to be no different.
He has already scored 14 goals in 19 games under the Portuguese coach. You can fully expect those numbers to increase this season.

Harry Kane
Aubameyang is the tempting answer here but, assuming no fitness problems, there can be only one true answer.
Kane has outperformed his expected goals stats in each of the last five seasons – not even Lionel Messi has done that!
If Heung-Min Son continues his creative streak, which saw him get eight assists last season, and Giovani Lo Celso builds on his relationship with the England captain he could get a 20-goal season, no issues.
But those pesky injuries and a ridiculous schedule could potential stop him – he’ll be desperate to prove otherwise.

Pierre-Emerick Aubameyang
As the most lethal finisher in the Premier League, Aubameyang is surely favourite to win the Golden Boot this season.
He has a superb eye for goal and now has Willian to create chance after chance for him, while the Arsenal squad chemistry should be greater than ever before as Arteta spends even further time with his players.
Aubameyang has 22 Premier League goals in each of the past two seasons, and I’d be backing him to surpass that total this term.

Jamie Vardy
The evergreen striker belies his age and continues to prove the doubters wrong at the very highest level. The Leicester striker found the net on 23 occasions last season to scoop the award for the first time at the age of 33.
The former England international’s superb movement and confidence in front of goal will stand him in good stead to scoring 20+ goals again in 2020/21.

Pierre-Emerick Aubameyang
How Arsenal managed to keep hold of Aubameyang, I’ll never know.
Despite the fact that he’s spent most of his time in England playing from the left wing, Aubameyang’s still got one Golden Boot to his name and fell just one goal shy of Jamie Vardy last season.
With question marks surrounding the future of Alexandre Lacazette, Aubameyang could find himself deployed through the middle more often this season, which could mean even more goals.
In a settled system under Mikel Arteta, and with some exciting new signings around him, I’m fully confident in backing Aubameyang to score 25 league goals this season.