A Nigerian doctor has taken to his social media page to give the narrative of how himself and his friend who is also a doctor were “ char... 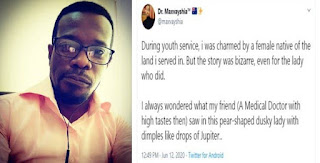 A Nigerian doctor has taken to his social media page to give the narrative of how himself and his friend who is also a doctor were “charmed” by two female residents of a community they served in.

According to the doctor, @Maxvayshia, the incident occurred in a South-South village – he further disclosed that while the charm worked on his friend and almost made him marry one of the girls, it however didn’t work on him.
He tweeted,
This will be the best song you'd listen to today: Kayode - Sideguy - Click Here

During youth service, i was charmed by a female native of the land i served in. But the story was bizarre, even for the lady who did. I always wondered what my friend (A Medical Doctor with high tastes then) saw in this pear-shaped dusky lady with dimples like drops of Jupiter..
Had just a primary school cert but generally looking caked up in makeovers that covered a lot of lack of exposure and body odour the small of inferior quality bedford lorry engine oil. My man was always a butt man but this lady had above average busts and slapped behind…
But this my man was determined to MARRY her. All of a sudden. Yea you heard that right. MARRY. In fact, the only quarrels we had was on her account. My guy was out of his senses, i thought. I became convinced the day his mother needed to be discharged from hospital having….
Been discharged from Hospital after 3 weeks on admission. Boss stopped picking her calls cos he had to concentrate on paying this lady’s brother’s rent, school fees and buying him a bike to start side business. I figured something was wrong. At this point I will summarize…
I needed to act fast. I found a way, after a lot of patience and calculation, to blackmail the lady and got her to not only confess but tell and bring out what she used in charming my friend, divulged where it was all made. But i wasn’t concerned with who made it.
Quietly worked on getting the reversal cos “her life now depended on it”. After 2 weeks, it was done but money was spent. Yes. A week after this, she was taken back to my friend (to give the reversal time to work) and made to narrate the confession in his presence….
My friend in the meantime had been waiting for her to come and clear up her things from his apartment as he was confused as to what so many of her belongings were doing in his room. Now here is the surprise…. She had a “bff” best friend, who i and my friend knew and were friendly with. I noticed she liked me but i was indifferent. She was lively and fun before this whole incident. My friend:s lady was not going to go down alone so she had her join us in this confession. Turned out that this lady charmed me too but to her shock….
It didn’t work. She went to her source THREE times and tried it 3ce. Didn’t work on me, she observed, despite intensifying it. It made her turn against her source as she believed she was duped. Clashed with her source. I was a bit perplexed and a little amused. Not upset. No….
My guy got over her immediately but till today, even when married to another Medical Doctor, with 2 children, still cannot forget such experience cos he never believed such was possible for him. It is good we can laugh over it now bit that is how a Medical Doctor could….
Easily have become a palm wine tapper in some village in the south south region of Nigeria. Olorun oni jeka ri radarada laye wa oo. 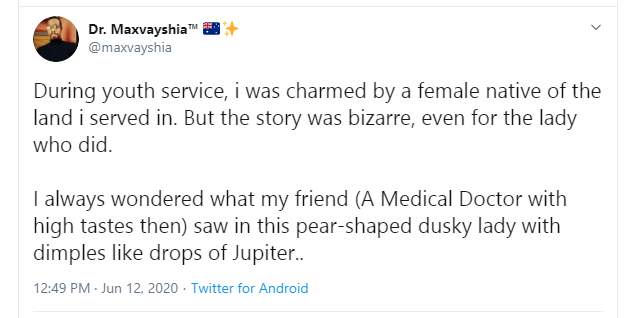