A mother has hit back at people who criticized her for using heavy makeup on her 5-year-old daughter. Days ago, the little girl wen... 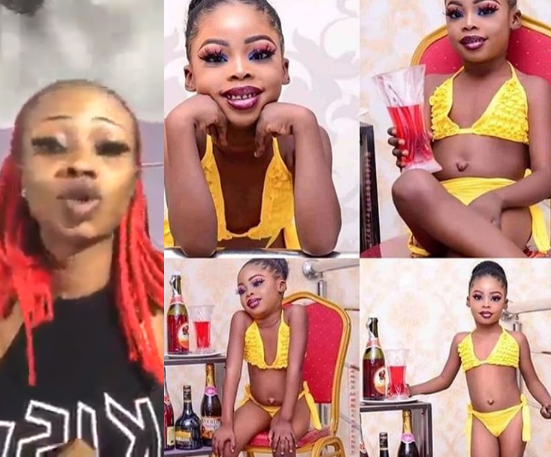 The mother has now slammed those who called her out. Adewale Yetunde Adedeji, the mother of 5-year-old Adewale Okiki, said she has been sick and couldn't respond to the critics but had to after the calls and messages became too much.
She informed her critics that the child is hers and she can do whatever she likes to make her happy. She added that her daughter likes it too and so does her husband and those who matter.
She proceeded to bring her 5-year-old daughter to speak.
"My name is Okiki Adewale. I am 5 years old. I do what I like, I like what I do," the little girl said.
The child's mother then went on to call out Nigerians for interfering in what goes on in her family. As she spoke, a man's voice is heard in the background supporting her.
She told her critics that she will do even more for her daughter next year. She told Nigerians that poverty and frustration is the reason why they have a problem with her daughter wearing makeup.
"Poverty na bastard," she said as she asked Nigerians to change their mentality.
She also advised them to direct their outrage to Aso Rock where the real cause of their problem is.
Reacting to threats that "human rights" will come after her, she said they wouldn't dare. She asked where the human rights people have been all those years when she's been taking care of her daughter, even in sickness.
She told her critics that sharing the photos of her daughter to call her out only served to make her daughter more popular. She said she has received calls from brands and from people in foreign countries asking to work with her daughter. She claimed that CNN even carried her daughter's story.
She stated that she and her husband have received multiple calls and messages from Germany and UK, asking to work with her child.
She added that the fact that she uses makeup on her children doesn't mean they will become prostitutes in the future.
She pointed out that there are people who wear hijab who get raped, babies also, so dressing her daughter in a bikini will not be a reason for a rapist to come after her child.
She further stated that those who are calling her out are just frustrated people who are finding it hard to have children of their own.
Watch the video below.